While this series is called The Cassette Chronicles, if you were to file this particular article under a sub-heading it would likely be “Albums My Mother Wouldn’t Buy For Me When I Was A Kid Because of the Cover Art”. I think if you look at the cover art and remember the time that it came out, you can probably understand why a parent wouldn’t buy the album for her nine year old. I actually had to hear the album in full for the first time at a friend’s house because he had it while I was out of luck until a few years later when I got my first job and could buy whatever music I wanted.

The funny thing is, the album art actually didn’t make any impression on me at that age. Instead, it was the song “Tough Guys” that made me want to have the album. Between the audio snippet from the “Our Gang” serials (“The Little Rascals” for those who don’t recall the other name) that fronted the song to Kevin Cronin singing “She thinks they’re full of shit”, to a nine year old who loved the “The Little Rascals” and didn’t quite yet have fluency in profanity, this was just a COOL song!

Of course, without strong songs the album wouldn’t have gone anywhere. However, a lack of material wasn’t a problem for REO Speedwagon on this album. The songs ranged from straight up rockers, power ballads and even songs that sounded as if they belonged in another era (The song “In Your Letter” stirs up echoes of 60’s pop music).

The first side of the album features the most recognizable of the band’s songs. Kicking off with the sublime rocker “Don’t Let Him Go”, the band moved with ease from one song to the next and keeps things on an electrifying high throughout. I think anyone who grew up in the 80’s has to know the #1 hit “Keep On Loving You”. This was back when the ballads were part of the whole instead of that calculated “We Need A Love Song” type of track so I actually still rather enjoy the song.

As for “Follow My Heart”, it’s got a huge hook to it but at the same time it’s a dynamically powerful vocal performance set to a killer rock sound as well. “Take It On The Run” was another big hit for the band and it remains one of the songs I remember liking right away when I first heard it.

The second side of the album kicks off with “Tough Guys” and like I said, I really love the song for reasons explained above, plus the fact that it’s just a damn fine rocker. As for the rest of the song on Side Two, I think it is probably less remembered than Side One because it has more album tracks than singles but the song “Out of Season” is an outright underappreciated classic. It’s a burning bright rocker and I have to say that I probably forgot how much I liked it until listening to the album again for this article. “Shakin’ It Loose” also rocks out pretty fast. “Someone Tonight” isn’t quite as fast, but still moves to a quicker beat. The album closes with “I Wish You Were There” which despite the notion the song’s title might give you, isn’t quite the same kind of ballad that “Keep On Loving You” is. However, like that song, “I Wish You Were There” is a rather appealing number (the backing chorus helps give an extra dimension of depth to the song) and actually does a pretty remarkable job of straddling the line between rocker and ballad to bring the album to a fully satisfying conclusion.

While these days the band occupies the classic rock package tours you see going out every summer, REO Speedwagon was arguably the hottest band in the country in the early 80’s on the strength of the Hi Infidelity. If this album was released today, it would be filed under the “melodic rock” banner. However you think of the band, this was a huge high point for them and for my money, the album still resonates as strongly today as it did back then.

NOTES OF INTEREST: Hi Infidelity has been certified ten times platinum and hit #1 on the album chart when it was released. The album was reissued in 2011 for the 30th anniversary and included a second disc that had demo tracks from the original recording sessions.

Mr. Mister’s Richard Page is credited with providing backing vocals on the album. 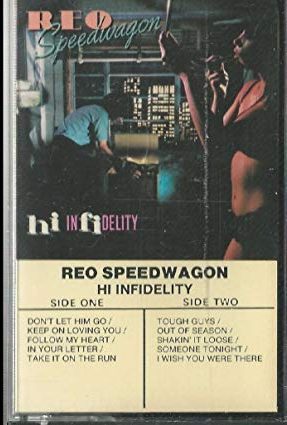