For those of us who consider ourselves passionate fans of music, the truth of the matter is that there is always going to be entirely too much material for us to get to it all in a timely manner. And that’s allowing for the notion that we’ll ever get to it all.

Of course, taking three decades to check out an album is likely pushing the boundaries of the phrase “Better Late Than Never” but such is the case with Keel’s self-titled fourth album. While I have a Facebook friend who is seemingly friends with singer Ron Keel, I can’t begin to even guess whether or not I’ve ever heard a song from the band before now.

I say that because I was surprisingly taken with this album. Things kick off with a rousing and rocking anthem in “United Nations”. The music is incredibly strong with the guitar work of Bryan Jay and Marc Ferrari being immediately captivating. Ron Keel’s voice quite obviously fit the material but I found myself really listening to his vocals throughout the album, which led me to kicking myself over having ignored the band all these years.

The song “Somebody’s Waiting” was a bit of dip in the quality for me. It’s okay but doesn’t seem to have quite the same energetic feel as most of the other tracks on the album. Seeing how the album was put out in 1987, you can imagine that there was a power ballad type of song included. And with “Calm Before The Storm”, you’d be right in that assumption. I wasn’t quite taken with the song but I did like that the lyrics didn’t suffer from a sugary overload of trite emotional waterworks.

Still, the first side of the album is explosively rocking with the killer “Cherry Lane” and “King of the Rock”. The latter song is a furious blaze of music, with the song’s opening guitar driven intro quickly establishing itself as a song that needs to be not only heard, but played repeatedly…on 11!

The second side of the album opened up a little weaker than I would’ve hoped. “It’s a Jungle Out There” isn’t necessarily a bad song. The fast paced number just kind of felt rushed and everything ran together for me. It didn’t feel as if it truly blended all the elements together.

However, that’s the only down note about the second side of the album. Because wow did Keel kill it with the other songs. I don’t know what it was about the title “I Said The Wrong Thing To The Right Girl” but from the title to the actual song there was just something about the song that really appealed to me. I know that the title may seem a little silly but for me, any residual giggles about the title were blown away by just how good the song was. Another potentially silly sounding title was “If Love Is A Crime (I Wanna Be Convicted)”. I know it sounds kind of like something that would be included on a Ramones album but again the song itself is so strong that the title is just left in the dust when you think of it.

I thought “Don’t Say You Love Me” was a standout track. And thankfully, the song was a balls out rocker. Keel ends the album with literal and figurative fireworks. The song “4th of July” explodes from start to finish. Given that we just had the holiday recently, the way the song concludes with the inclusion of recorded fireworks going off, it was a nice kind of celebratory way to end the album.

So I’ve once again been surprised by my own musical ignorance. As I listened to each song I kept wondering why this album hadn’t been a bigger thing back in the day. The irony of thinking that while I was one of those millions who ignored the band and album does not escape me.

I will say that while the cassette played well enough for me to be able to write this article, it does seem like it might be ready to give up the ghost. I don’t say this often but I liked the album so much that I’m going to be looking to upgrade to a CD edition as soon as I can because the Keel album is just too good for me to not have in my musical collection anymore.

NOTES OF INTEREST: Guitarists Marc Ferrari and Bryan Jay would leave the band a year after the release of this album. However, they rejoined the band in 1998 and again in 2009 for Keel’s 25th anniversary reunion.

Black ‘N Blue frontman Jaime St. James sang backup vocals on “It’s A Jungle Out There” and “If Love Is A Crime (I Wanna Be Convicted)”

The song “Calm Before The Storm” was co-written by the longtime Dio and Rainbow bassist Jimmy Bain. 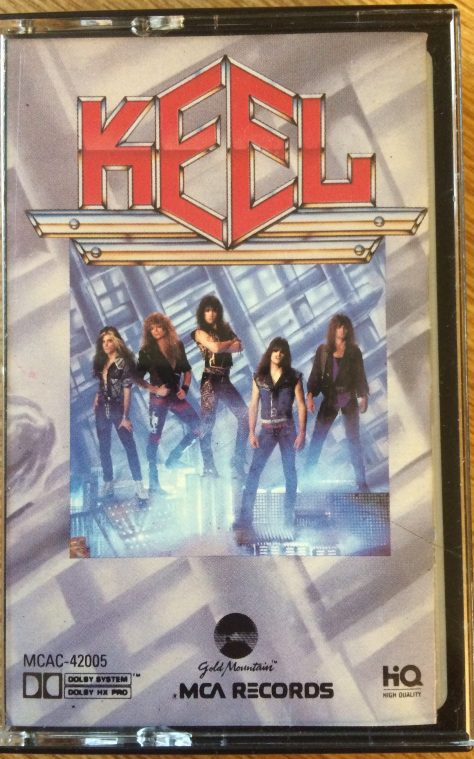