There’s a lot to talk about with the Misspent Youth album but I think the first point to be addressed has to be the band name. Shy England seems to be the name that was used for this particular release when it hit the US. You see, the band is actually known as Shy.

I spent a bit of time trying to research the official reason for why the name change occurred but I wasn’t able to find any confirmable sources. So I reached out to some other music fans on a Facebook group I belong to and I’m led to believe that the name change was due to there being an American band with the name Shy at the time of this album’s release. Again, I can’t seem to confirm this for certain but it does have a ring of truth to it since I’ve known other acts who’ve had to deal with that particular issue in the past.

As for the album itself, I find it a bit amusing that this album is considered a critical misfire in the British rocker’s overall discography. I’ve mentioned in a recent past article that I also write book reviews. In the early days of doing that I read a book that was winning rave reviews and went on to win some awards as well. Problem for me was that I hated the book. I couldn’t understand how others were raving about how good the book when it was just something so bad that I had to pass on doing an actual review because it would’ve just said, “This book sucks!”

How does that relate to Misspent Youth, you ask? Well, the situation is reversed for me here. It was not a well received album from everything I could find online, and yet I really thought it was a pretty darn good album overall.

I did see one source that said the band had a falling out with producer Roy Thomas Baker early in the recording process for the album but whatever the behind the scenes rigamarole was, I still found plenty of music to enjoy.

I think there were a couple of different versions of the album floating around. The version I have opens up with the song “Give It All You Got”. The song is a hook filled uptempo rocker, a prime example of the type of song you’d expect to find on a late 80’s rock album. That’s not a knock on the song though as I really enjoyed it. It got me fired up from the get-go and I couldn’t wait to hear what else the band had to offer. But in poking around online, it seems that “Give It All You Got” wasn’t the lead track in the original release of the album. The first side of the album had a slightly altered order because this song was actually last on Side One at one point.

The songs were written by guitarist Steve Harris alone (it should go without saying but just in case anyone is confused this NOT the Steve Harris from Iron Maiden) or with drummer Alan Kelly. And Harris sure could shred on the guitar! The songs “Burnin’ Up” and “Money” are prime examples of how fleet fingered he could be on the fretboard.

Regarding “Burnin’ Up”, I loved the song musically but I did think singer Tony Mills was a bit over the top vocally on the song. His voice occupies the upper register and that does give him a real soaring quality to his vocals but on this one song, it didn’t quite feel right to me.

The band’s ability for crafting adept power ballads is put on display with “After The Love Is Gone” on side one of the album. I’d like to complain about the sugary nature of the song but there was something about the song that hooked me just a little bit. I’m not saying I lost my marbles over it or anything but it was surprisingly entertaining to me.

The first side of the album closed out with “Never Trust A Stranger” which is not only a great idea in respect to the real world but this song was a flat out rocking track you could really get into and find yourself singing along to as well.

The second side of Misspent Youth kicked off with another musically rousing song in “Broken Heart”. The pacing gives you another dose of high energy rock and roll and the instantly grabbing chorus ensures that the song completely gels together as a whole.

“Shake The Nations” goes for the fist shaking anthem territory but I’m not sure it quite got there. I don’t know if it is the song itself that didn’t fully get my attention or if it was the slightly muddied feel to the production of the song but I couldn’t see myself pumping my fists to this one. I was also a bit disappointed in the balladry of “When You Need Someone”.

But the album’s closing song “Make My Day” both captured that anthemic feel and finished the release with an in your face rocker that left you a bit spent and rung out.

I admit that other than knowing the band existed and that Tony Mills had been the frontman for the band’s most successful period, I really hadn’t known much about or heard any of the band’s music. Others may think little of Misspent Youth, but I found it a darn good bit of entertainment and I kind of wish that I’d been able to experience the band back in the day. I think I would’ve gone on to become a much bigger fan of the band. I know that because I liked Misspent Youth so much, I’m hoping to go back and check out some of their other early material and see just what I’ve been missing out on for all these years.

NOTES OF INTEREST: The band Shy is listed as still active to this day but with a completely different lineup. The band put out a self-titled album in 2011 but there’s been no further releases since that time.

Guitarist Steve Harris passed away in 2011 from a brain tumor.

With the recent passings of both Eddie Money and then Ric Ocasek, the speculation was who would be the third loss, since these things always happen in threes. Sadly, we found out the identity of that third person on September 18th, 2019. Singer Tony Mills (who had a prolific career fronting TNT and working as a solo artist aside from two stints with Shy) passed away after a six month fight with pancreatic cancer. His final solo album, Beyond The Law was released in June of 2019. 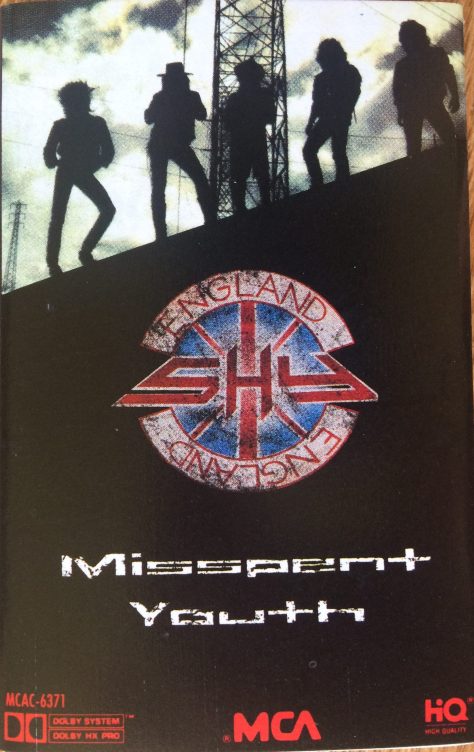