The impetus for selecting Great White’s Hooked album for this week’s article came not from reaching into the Big Box of Cassettes like so many other pieces in this series. No, this time it actually came about from a big bag of CDs that I bought at a flea market a year or so ago.

I hadn’t gotten around to listening to many of those purchases yet but in the midst of doing some straightening up of my various CDs, I looked into the bag and realized that I had a copy of Hooked on disc. I’d completely forgotten that I bought it but I ended up listening to it and was going to write about it for a message board where I post brief CD reviews.

But then I remembered that I have a cassette copy of the album. I bought the cassette edition of the album when it originally came out so I dug it out and thanks to some unscheduled down time at the day job, gave it another listen in order to turn it into the article you are now reading.

After the big success of 1987’s Once Bitten and 1989’s …Twice Shy, I know that I was really looking forward to Hooked being released. I remember seeing ads in the magazines I read at the time. When I got my hands on the album, I really enjoyed it but only played it a few times for reasons that have slipped my mind by now.

1991 was well into the fading commercial fortunes of 80’s metal and Hooked was far less successful for Great White than its two album predecessors, even though the album did get pretty good critical reviews. By giving the album a new listen (or three) I came to realize that Hooked was a damn good album that rivals the band’s two best known releases and might even surpass them in some respects (if you add in their spectacular 1999 album Can’t Get There From Here, you’ve got the quartet of what I think is their best material).

The album opens up with a couple of stone cold killer rockers in “Call It Rock N’ Roll” and “The Original Queen of Sheba”. The latter of those two songs is just a ballsy rocker that you can really sink your teeth into. However, “Call It Rock N’ Roll” perfectly encapsulates all that made Great White such a hot band for the latter part of the “Metal Years”.

While “Cold-Hearted Lovin'” has a uptempo groove to it, there’s also a sly bluesier side to the music that makes it that much more of an endearing song to me. The first of the two cover songs on the album is “Shake It” from The Angels but Great White did a fantastic job of making the song it’s own.

Say what you want about the band’s Led Zeppelin pretensions but the combination of Jack Russell’s voice and the strong guitar work from Mark Kendall (as well as Michael Lardie, who co-wrote six of the ten tracks on the album as well as co-producing it) gave the band a signature sound in their own right. You couldn’t hear Jack Russell singing and not think, “That’s a Great White song!”

The first side of the album closes out with a shockingly good ballad called “Lovin’ Kind”. It’s good songwriting from start to finish that comes alive with Russell’s vocal performance and a chorus that resonates with the listener.

“Heartbreaker” opens side two of the album and the song mixes a slower pace with more of a rocking beat back and forth during the song. But it was the next song up that really scored big with me. “Congo Square” has a great rhythmic vibe to it while simultaneously feeling as if the band was purposely restraining their full power until they unleashed it as the song moved towards its ending. There’s a long guitar solo on the outro that is just COOL!

“Desert Moon” might be the album’s best remembered song given that it served as their concert opener for a number of years. The strengths of the song haven’t faded over time and if I was to ever see the band live again (I saw them on the …Twice Shy tour) I would love to hear the song performed.

An ode to one’s hometown makes for a fun, slick and playful party atmosphere on “South Bay Cities”. Even when I first heard the song when the album came out, this song stood out to me for some reason.

A cover of The Small Faces song “Afterglow” closes out the album and while it is a much more mellow fade out than I normally prefer, this song was just amazingly done here and I couldn’t fault anything about the choice in song or placement in the running order.

My fandom for Great White didn’t start until I first heard “Rock Me” from the Once Bitten album. I eventually heard their earliest stuff but I found that stuff just OK. Nothing wrong with it per se, but it never stuck with me as much as their more noteworthy releases. I understand the reasons for the band’s fading commercial fortunes with the changing musical climate and then later their involvement with the nightclub fire and bitter breakups with singer Jack Russell. But if you go back and listen now, you will find that Hooked is a great rock and roll album that deserved a far better fate than it ended up getting.

NOTES OF INTEREST: While less successful commercially, the album did eventually get certified gold. More impressive is that they did it without a bonafide hit single. “Desert Moon” got some single airplay but nothing that made a real dent in the charts or anything.

The original cover art featured the full naked female model on a hook over water. However, it was eventually replaced by a version that showed just the model’s head and arms on the hook.

Hooked was the last album to feature Tony Montana as the band’s bassist. 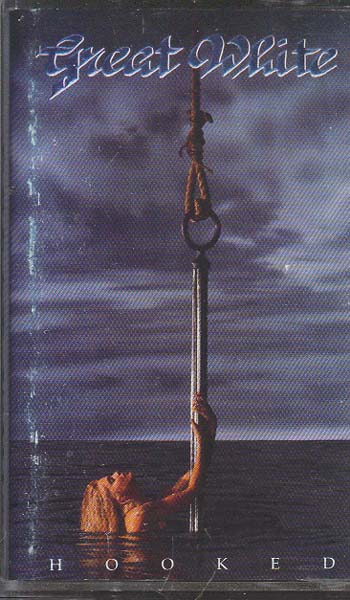