In 1983, Quiet Riot rose to the top of the metal world on the basis of their Metal Health album. They were, so to speak, the “kings of the world”. Great things seemed to lay ahead for them.

By 1988, the metal world had pretty much passed them by. The decade where metal ruled the world had pretty much left the band in the dust. This would be due in large part to the fans moving on from them and other bands sick and tired of listening to vocalist Kevin DuBrow badmouth them in the press.

But 1988 also saw the other members of Quiet Riot firing of Kevin DuBrow from his own band and the hiring of former Rough Cutt vocalist Paul Shortino. This lineup switch brought about a very different sound for the band on the Quiet Riot album. Gone was the bombastic metal explosiveness. Instead, when you listen to this album, you find that this is more of a bluesy hard rock sound for the band.

I’ll be the first to admit that I’d long moved on from Quiet Riot at this point. I vaguely recall seeing a video that I think came from this album and when I heard the music in 1988, I found myself thinking, “What the hell is this?” and never bothered to check out the album itself. It was deciding to write this article that brought about my first time listening to the release.

The song “Stay With Me Tonight” was the single released and it leads off Side One. I can’t say that this was the song I saw the video for, but it does seem likely that it was. I may not have thought much of it three decades ago but as I listened to it now, it was a pretty effective song. Yes, time changes and so did my opinion.

I wasn’t crazy about how the production sound on Shortino’s vocals were done on “Callin’ The Shots”. They were overproduced and made it sound kind of fake and poorly edited together or something. The song “Run To You” really drives home that bluesy sound with it’s slow burn tempo. However, the addition of a big backing vocal part on the chorus threw the song’s balance off for me.

But then Side One closes out with a couple of really solid rockers. “I’m Fallin'” is a damn good song but the band really cuts loose on the song “King of the Hill” which has a pretty vibrant sound and vibe to it even now. By the way, the latter song was co-written by former Yes guitarist Trevor Rabin.

With the addition of Shortino to the lineup, he was pretty involved with the songwriting along with drummer Frankie Banali, guitarist Carlos Cavazo and producer Spencer Proffer. While there were other contributors along the way, this was the main grouping of songwriters for the album. However, with change being the only sure thing when it comes to the Quiet Riot lineup, Shortino was not the only new addition to the group’s lineup. Chuck Wright had left the band and they replaced him with Sean McNabb.

The second side of the album features a brief instrumental called “Lunar Obsession”. It is less than two minutes long and sadly, it just felt out of place to me and it really didn’t seem to need to be included.

Other than that, Side 2 ROCKED! Songs like “The Joker” and “Empty Promises” were electrifying, just pure burn rockers. The band was on fire with “In A Rush”, a song that saw the pacing match the title but in a good way.

The power ballad influence was felt most strongly with the song “Don’t Wanna Be Your Fool”. It starts off as you might expect with a slow but steady tempo. But it gradually gets stronger and faster. By the end of the song it is more of a straight ahead rocker and you kind of forget the ballad like beginning.

In 1988, the lyrics for “Coppin’ A Feel” might’ve raised an eye or two but most likely would’ve been overlooked for the most part. These days, the lyrics are slightly more problematic. Still, as a whole the song is just a killer.

I was looking up the album online and while this one did seem to do slightly better than the QR III album, it was still seen as a big disappointment. I guess I can understand that if we were still in 1988. But in the here and now, I really have to say that despite a couple of speed bump tracks the Quiet Riot album is actually a damn fine piece of work. It may be unappreciated by the majority of metal fans, but you can count me in as one who will tout the positives from this album from this point forward.

NOTES OF INTEREST: Drummer Frankie Banali is the one mainstay of the group to this day. Currently, he’s battling Stage 4 pancreatic cancer and just recently a GoFundMe page has been set up to help pay for his medical bills.

Quiet Riot split up after touring for this album. There was a live release coinciding with the tour for the album called ’89 Live In Japan. There’s been some confusion about the true name of this album as well. It is the second album from the band to be self-titled. It has apparently also been called QR IV. Meanwhile, Paul Shortino has said the title is just QR.

This was the only studio album that Paul Shortino recorded with the band. He’s gone on to play in variety of bands including King Kobra and Appice. He’s also got his own band, Shortino. If the global health crisis that is going on at the time of this article’s publication doesn’t cancel it, Shortino (the band) will be part of the first day lineup at the New England Rock Fest in Chicopee, MA on Friday August 14th , 2020 and feature ex-Dio guitarist Rowan Robertson in the lineup.

Sean McNabb has had a prolific music career following his time with Quiet Riot. He’s played with House of Lords, XYZ and Dokken. He was also with Great White for three separate stints including recording the Can’t Get There From Here album, my personal favorite Great White album. He’s also done acting work including appearing on the Sons of Anarchy and Mayans M.C. TV series. 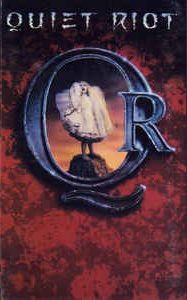