Singer-songwriter Matt York, who made a name for himself in the mid-1990s as the front man for the local band Wide Iris, recently released a nine-song solo album called Boston, Texas. The South Shore resident will have a CD release party on Saturday, January 30, 2016, at Atwoods Tavern in Cambridge, Mass. We recently caught up with York who is busy promoting his new disc and upcoming CD release party.

Limelight Magazine (LM): Your new album Boston, Texas is out now. How long did it take to record? Are you pleased with the album as a whole?
Matt York (York): I’m really happy with it. [Producer and engineer] Mark Bryant and I began tracking in early October and it was pretty much completed by Thanksgiving. We were really efficient and I think part of that was I’d done a lot of the prep work prior to recording and wasn’t writing parts/lyrics in the studio. We tried out some new ideas but for the most part there weren’t wholesale changes, so it allowed for us to record pretty quickly.

LM: Of the nine songs on Boston, Texas, do you have a favorite and why?
York: The favorites change from week to week, especially after hearing them a million times during the process but I think the final track “Love You the Same” is my favorite. I wrote it right before we started recording it and I like how simple it is.

LM: Can you share with us your songwriting process?
York: I started writing songs as a young teenager and it just seems to come and go. I don’t know that there’s a process as much as certain riffs/melodies emerge while I’m sitting around noodling around on a guitar and then they build from there. Some songs take ten minutes to write and others take years, so there’s definitely no formula for me.

LM: Mark Bryant of Seasound Audio in Plymouth, Mass., produced and engineered your new album. What was it like working with him? How much impact did he have on the album?
York: Probably my favorite thing about making the album was working with Mark. We had no previous relationship prior to the recording but quickly built up a rapport. He’s a great and thoughtful guy. We kind of speak a similar language musically and have similar influences which really helped. We had a lot of fun making the album and I think that comes through in the performance. Mark had a lot of great ideas and I’d highly recommend him to anybody thinking of making an album in the future.

LM: You dedicated this album to your dad, David York. Was he supportive of your being involved in music from a young age?
York: My dad just loves rock ‘n’ roll. He’s always loved it and was very supportive from the start. He and my mom bought me my first guitars, took me to lessons, drove me all the over place to play gigs when I didn’t have a license yet. He was always at shows when I got older and just loved being around the music scene. I’d really stepped away from it for years but thought it’d be fun to make another album and I knew he’d get a kick out of the process.

LM: You wrote all the songs on the album. Do you ever experience writer’s block? If you do, what do you do to get over it?
York: I don’t think I experience writer’s block but I do have times where I get stuck in a similar genre/tempo. I write ten slow, depressing songs but can’t write an up-tempo song or vice-versa. I find that using a capo to play in a different key or noodling around on a piano can help break me out of that though.

LM: You previously were in the band Wide Iris where you recorded four CDs and played gigs all over New England. Do you prefer being in a band or being a solo performer?
York: I don’t know, we’ll see. I’ve cobbled together a band to play some of the shows I’ve got coming up. My time with Wide Iris was really a blast. There was just three of us, we didn’t really know what we were doing, had a million shared experiences and had a great energy together. Even back then though, I always did acoustic/solo type shows. I imagine I’ll keep doing both because they are two very different things and honestly with the limited amount of places to play nowadays, doing both will hopefully allow me to play out more.

LM: Speaking of gigs, you previously performed in venues that are now closed, such as The Channel, The Rathskeller, and T.T. the Bears. How do you feel about the number of local venues that are closing in the Greater Boston Area?
York: T.T.’s was a heartbreaker for me. Some of the really great moments in my life both as a performer and as a fan of music happened there. I imagine live music will always have ebbs and flows and that you’ll see periodic resurgences. I think it’s a bad thing for young bands to not be able to play out live regularly because when you have the opportunity to do that, even if it’s at lousy venues with small crowds, you learn from it. When you’ve dragged a big Marshall stack up two flights of stairs and played to five people and made no money, it can be as impactful as playing a packed room of friendly faces at a great club.

LM: Since you’ve been involved with the local music scene for a number of years now, are there any important lessons you’ve learned along the way that you’d share with someone starting out?
York: I was fortunate enough to start playing the clubs of Boston at a really young age, so I saw how much talent there was/is right from the start. I think some young artists probably think that their talent alone is going to be enough and that they’ll eventually be discovered. The reality is there are a million awesome artists out there and a handful of them get lucky but most of the ones that are successful are constantly working and hustling. Playing to an adoring crowd is such a tiny sliver of what being a working musician actually is. I can’t tell you how many artists I’ve seen once that blew my mind and then I never heard another thing about them again.

LM: Your CD release party is scheduled for Saturday, January 30, at Atwoods Tavern in Cambridge, Mass. What can your fans expect at this show?
York: I’m looking forward to it. Randi Millman who booked T.T.’s for years has been booking some really great acts at Atwoods and so I’m really thrilled to have the CD release there. My friend Rick Berlin who’s been an influence on me and so many other local musicians is opening the show. I’m going to do some solo acoustic songs as well and then do a set with a full band so it should be action-packed.

LM: Is there anything you’d like to add?
York: Thanks for the opportunity and thanks for doing what you do. 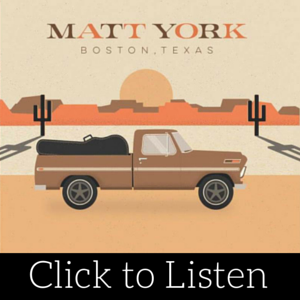 One thought on “Matt York brings something ‘New to You’”