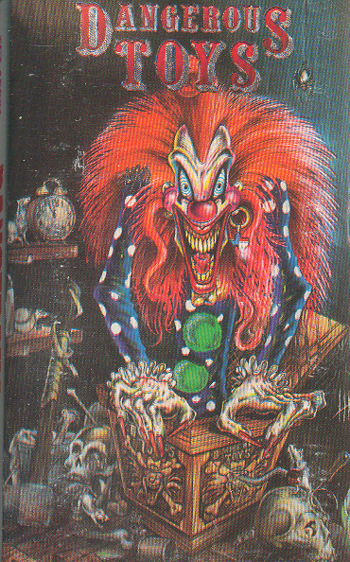 If you have a phobia of clowns, whether they look like normal circus performers or psycho killers out of a Stephen King novel, you probably never made it past the cover art of Texas rockers Dangerous Toys self-titled debut album.

However, if you did get past the cover, you found yourself confronted with a mostly in your face release of pent up aggression channeled into a sometimes quite effective dose of rock/metal.

The band does get categorized mainly as a glam metal act but if you listen to their music, it is more of a sleaze rock kind of thing. There’s an unapologetic beer, babes and guitars kind of vibe to the music

Vocalist Jason McMaster and company explode out the speakers with a double shot of the band’s brand of rock and roll. “Teas’n Pleas’n” is an unrelenting track that leaves you little time to catch your breath.

They follow that up with what I think might be their most musically fulfilling song in “Scared”.  When you listen to the lyrics to the song, combined with the soundtrack, it is pretty easy to visualize your own kind of horror movie (even if you haven’t seen the video they made to go with the track). It really is quite effective, which for me at least is saying something as I’m really not a horror movie fan. I had gotten my hands on a CD copy of this album a couple of weeks before I got the cassette and whenever I hear the song, a movie begins playing in my head. Seriously, you should go check out the video on YouTube.

For the rest of Side 1 of the album, I thought the band missed the mark a bit. Two more pedal to the metal rockers combined with “Feels Like A Hammer” a slower track with what seemed to me a fuller depth to the musical sound, all felt a little wanting to me.

When you flip the cassette over to Side 2, you get two more tracks to kick things off that showed just how potent the band’s songwriting could be. Leading off was the guaranteed to upset pretty much any woman (or if you play the song at work, human resources), “Sport’n A Woody.” For the inner 10 year old boy who loved dick jokes that seems to reside in a lot of men, this is a hilarious track. If you have anyone that ever asks you to explain the term “cock rock” to them, play them this song and all shall come clear. I can still remember singing along to this song whenever I heard it back then and being unable to stop laughing every time.

To my recollection, this song is one of the band’s three (along with “Teas’n Pleas’n” and “Scared”) best known songs. But the track “Queen Of The Nile” should be included as final inclusion on the band’s “Big 4” song sampler. It is an undistilled adrenaline charged rocker that continually keeps a charge of electricity running through me when I hear it.

Side 2 falls victim to the same flaw that Side 1 had, where the first two tracks are great but the rest pale in comparison…at best. There’s a bit of an interesting feel to “Here Comes Trouble” but otherwise the remaining songs kind of all run together.

While the album might be a bit of a disappointment because I thought only four of the tracks were outstanding, four songs is actually pretty decent when you factor in a lot of bands from this time frame would’ve killed to have that many good tracks. When the album was originally released, I only had a dubbed cassette copy of it (remember doing that?), and hadn’t listened to it in years so perhaps that accounts for my initial expectations and subsequent letdown.

Dangerous Toys may not go down as legends of the era, but they do provide some solid entertainment and I have to say that I wish I’d seen them in their prime. I’m sure it would’ve been quite the memorable experience.

NOTES OF INTEREST: The band hasn’t released new music since 1995, but they still get together to this day to perform live on occasion. The song “Scared” is a tribute to Alice Cooper. While guitarist Danny Aaron is pictured on the back cover of the album, he didn’t actually play on any of the songs.