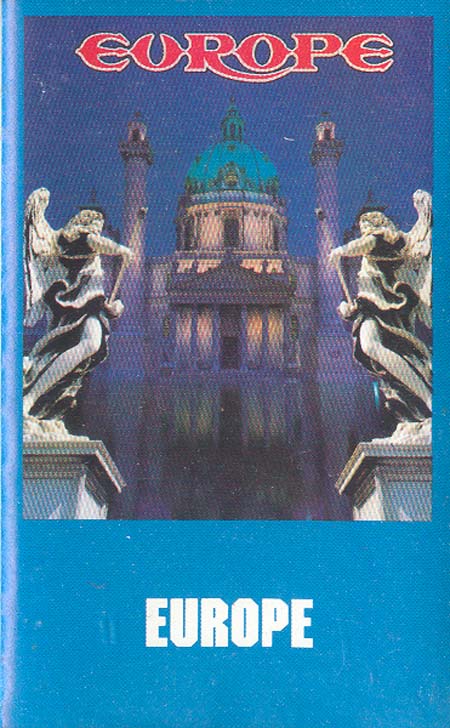 I would hazard a guess that when Europe’s third album, The Final Countdown, made the band into international superstars, only the most hardcore music lovers realized that there were already two albums to the band’s credit.

It is a bit funny to think that while the album was originally released in 1983, Europe’s self-titled debut didn’t get an apparent US release until 1989, at least according to the liner notes on this cassette edition of the album.

The album was recorded as a four piece and shows the nascent Swedish band in a far more uptempo mode with songs that rock out more aggressively than you’d ever think. The music is far less dominated by the keyboard sound that would come to define the band’s best days. This album is akin to how raw and rocking the first couple of Def Leppard’s albums sounded.

Three quarters of the lineup from this first album are still in the band to this day (though guitarist John Norum did leave the band in 1986 right as the band was breaking out. He returned to the band when they staged their reunion. I wrote about his 1987 solo album Total Control in a previous article in this series).

As for the songs themselves, there are some surprisingly good tunes here. Pretty much the entirety of Side 1 is enjoyable, particularly “In The Future To Come,” “Seven Door Hotel” and the rather hard rocking instrumental “Boyazont.” That last track finds Norum shredding the six strings available to him in a seeming hyperactive attack. It is flat out fantastic and then it just cuts out at the end. No fade out, it just stops at the point where you are left wanting more. I know that the song “The King Will Return” is probably the best known song from the album but strangely I found that while it is enjoyable, I didn’t quite rank it as high as others might.

The album’s second half has a solid opener in “Children of Time.” The song “Words of Wisdom” spends most of its running time in a bit of a melodic but plodding fashion, but the chorus makes up for that, it is performed at a far faster pace and I like the way singer Joey Tempest vocally delivers the lyric at that point. I love “Paradize Bay” a lot while “Memories” sees the album go out on a rocking note.

What makes this a good album in my mind is how I can sit here three decades later and feel that I’m rediscovering the band all over again. I actually owned this cassette in my own collection BEFORE making the 100 cassette purchase. But I hadn’t listened to it in a long time, so the memory of what the band had to offer at their start had admittedly faded from my memory more than just a little.

I’m not sure what the band or their fans really think of this album. It won’t be seen as an all-time classic, but I found it a surprisingly effective way to get started with the band or rekindle a fandom that might’ve died down a bit.

Of particular note is that this album’s sound is far more aligned with the band’s current day sound than that sound of their best days. After the band broke up in 1992, they only appeared together once (in 1999) before reuniting in 2003. Their sound was revamped into what can only be described as “classic rock” and they’ve been mining that particular vein of music for five albums now, rather succesfully.

NOTE OF INTEREST: The band’s drummer for this album was Tony Reno. He was let go from the band during the tour for their second album. He was replaced by Ian Haugland, who has been with the band ever since.