Analog Heart, a vocal powerhouse, guitar-driven, genre-colliding rock and roll band, are pleased to release their new single “Not Good Enough” with Limelight Magazine. Click on the link below to listen.

Analog Heart seamlessly combines alt-rock, pop, blues, alt-country, and R+B, among many other musical styles with jaw-dropping live performances that will take you on an unforgettable hypnotizing musical journey.

In 2012, Analog Heart released their self-titled debut EP with Scott Riebling, who is best known for his work with Letters to Cleo, Weezer, Fall Out Boy, Metro Station, Nina Gordon and Tracy Bonham. The band steadily became a fixture on the New England scene, establishing a presence at many well-known venues such as the The Middle East, The Bull Run, T.T. The Bear’s, The Berklee Performance Center, Cafe 939 and also embarking on several northeastern tours.

Later that year Liz Bills competed in American Idol and placed in the top 30 females in Hollywood, sharing the stage with legendary icons Mariah Carey, Keith Urban, Randy Jackson and Nicki Minaj. Analog Heart has gone on to share the stage with such acts as Bon Jovi, Will Dailey, Zach Deputy, Ryan Montbleau Band, Gary Hoey, The Brew, Kellie Picklier, Danielle Bradbery, Angie Miller, and Saving Abel, among many others.

The band’s first full-length album, Sun Here I Come, co-produced and engineered by Chris Piquette formerly of The Trophy Wives, was released in 2016 with an array of music videos and live performances. Analog Heart competed in the prestigious WZLX’s 2016 Rock and Roll Rumble, reaching the semi-finals and in turn kickstarting a local buzz that’s still sizzling in the Boston community.

The band has a single release party tonight (July 29) at Koto’s Grille in Salem, MA, at 8 PM. 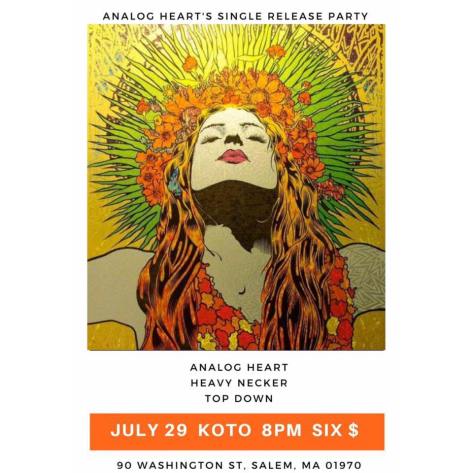