You ever wonder why and how a band slips away from your memory? I know that I do from time to time. More often since beginning this series that’s for sure.

New York rockers Trouble Tribe had their self-titled album released by Chrysalis Records in May of 1990, and I distinctly remember picking the album up in a store. But despite liking it, I don’t remember what happened to my copy of the album. I remember liking it enough to join the band’s street team though.

Do you remember those? You send away and join up to help spread the word in your area about the band. I joined a few of those back in the day, though I couldn’t really tell you for which bands anymore. Except for Trouble Tribe that is. The reason I remember their street team is because after I sent away to join up, I forgot all about it. Until the phone rang at my house one night. My mother called down the hallway to me and said I had a call. When I picked up the phone, much to my rather astonished surprise it was Trouble Tribe drummer Steve Durrell on the other end. The conversation has faded into the misty haze of time, but it wasn’t a quick hi and bye thing, there was a few minutes spent just chatting away. I can tell you that never happened with any other band that I signed up with.

Now because I haven’t listened to the album in quite a few years, it is almost like listening to it for the first time. It is something that I like to have happen from time to time because it gets my musical imagination fired up to see what’s coming next.

The first side of the album is outstanding. So much of the music from the 80’s metal heyday had become repetitive by this point (about two years before Nirvana killed the whole damn genre). While Trouble Tribe won’t go down as the most original band of all time, their music was pretty damn invigorating all the same and felt as if it was truly their own sound rather than following a blueprint laid out for them.

The songs “Tattoo” and “Here Comes Trouble” are the band’s two big singles and they lead off the album. You can find videos for the songs on YouTube. They’ve got the right sense of melody and hooks that should’ve made them, at least for a time, far more than one of the more obscure bands of the genre. But the jam packed album (13 songs including two quick instrumentals and a cover of The Beatles song “Dear Prudence”) doesn’t stop there. Click HERE to view Trouble Tribe performing “Dear Prudence” live.

There’s a nice little bluesy intro on “Gimme Something Sweet” and the power chord driven ballad “In The End” sold itself well with me. “Back To Wall” has some standout guitar work from Adam Wacht. “Boys Nite Out” flat out rocks. Throughout the album, singer Jimmy Driscoll gives a sublimely lights out vocal performance.

As for Side two, after the heavy rhythmic pounding of the instrumental “Tribal Beast,” the high energy rocking continues with “Red Light Zone,” another killer piece of music. That flows into the edgy rocker “(Angel With A) Devil’s Kiss”.

Nobody’s perfect and that Beatles cover fell flat with me, though I’ll admit I’ve never been much of a fan of The Beatles and that may play a part in why I didn’t care for this version of the song. But things get back on track with the rocking “One By One”. The band slows things down with “Cold Heart” which is another big power chord driven epic ballad type of track. It’s not as good as “In The End” but the underpinnings of a memorable track are there for all to see. The short fast paced instrumental “F’s Nightmare” kicks things back up briefly as the album comes to a close.

I am quite terrible at making accurate predictions but since that doesn’t stop me from buying a lottery ticket, I don’t see why I can’t make one here as well. I think if this album had been released even just three years earlier, Trouble Tribe as a band might’ve had far more of a commercial impact. Still, this is definitely an overlooked and underserved gem of a rock and roll album and you’d do yourself a kindness to get your own copy. It may have taken nearly 3 decades to fully appreciate the album but I’m there now and you should find your own path to the Tribe as well. 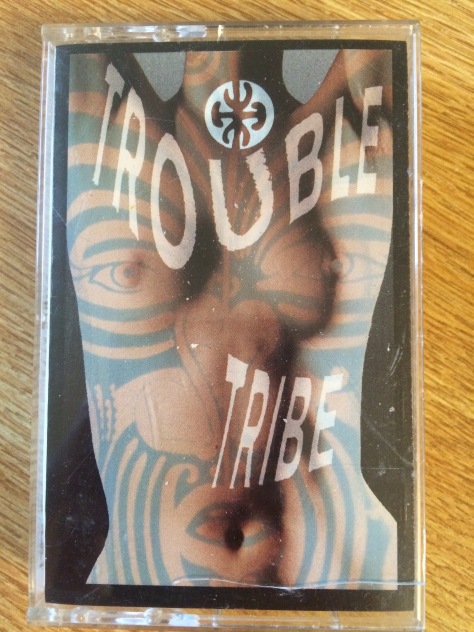 Notes of Interest – The band has a website and a Facebook page. However, it has been awhile since either has been updated. The last information posted on their http://www.troubletribe.com website said the band was in the studio working on a new album, but that was in October of 2015.