Back in late April of this year, I wrote about Hurricane’s album Over The Edge. For those that don’t recall, I pretty much didn’t really like the album except for a couple of songs. I had mentioned in that article that a friend of mine was of the belief that the band’s first album was a far superior release.

I finally decided to see if his assertion was something I would agree with. Surprisingly enough, I have to say that I do. Released by the band in 1985, Take What You Want, shows the band in its musical infancy with their “rougher” edges yet to be smoothed out to make the band more palatable for the masses.

To be fair, given that there were only six songs on the original vinyl release of the album, this release should probably be classified as an EP, but that slight nitpick aside, this was a much more enjoyable album for me to listen to. I should also note that there are a few discrepancies on the album’s liner notes. The liner notes list 1985 as the release date but on the actual cassette it says 1987. I’m not sure if this is because Enigma Records decided to re-release the album when they signed the band or not. Also, the liner notes also say that the program is repeated on both sides of the cassette but it isn’t. The first three songs are on side one while the last FOUR songs are on side two. And yes, I did emphasize that there are four songs on side two because there was a rather intriguing instrumental called “La Luna” that was added to the cassette that did not appear on the vinyl release.

Musically speaking, the album is a much more raw sounding recording. The production on the album is definitely not what you will find on the band’s subsequent releases. At times, the vocals from singer Kelly Hansen sound as if they were recorded in an echo chamber and then added into the soundtrack but yet not fully integrated into the mix as a cohesive whole.

While it is something to note, the rawness of the band’s sound didn’t affect my enjoyment of the music. In fact, it pretty much served as an enhancement to what I was listening to. Like I said, I was not pleased with their second album but this album really sold itself well to me. With the exception of the middling ballad “It’s Only Heaven” (which did have a hot guitar solo from Robert Sarzo), the band rocked out through the other tracks.

“Take Me In Your Arms” had a bit of a restrained take on the pacing at the start of the song but then blossomed into a rocker, but “The Girls Are Out Tonight” kicked into high gear from the get-go. The same can be said for the title track, the namesake track “Hurricane” and “Hot and Heavy”.

I missed out on this release when it first came out and though I knew about it all these years I never bothered to seek it out. It has been in the Purchase Street Records 100 cassette purchase box since I bought them and though I have only now gotten around to listening to it, it did really pay off for me.

Yes, hindsight is always 20-20 but this version of the band is one that I could’ve easily found myself getting behind. The songwriting is pretty damn good here. It feels a little less calculated than what was to come on album two. If I am to hazard a guess, Take What You Want is the best musical primer for anyone that wants to discover the band and is also the demonstrative choice for what the band should have been like throughout its original run. 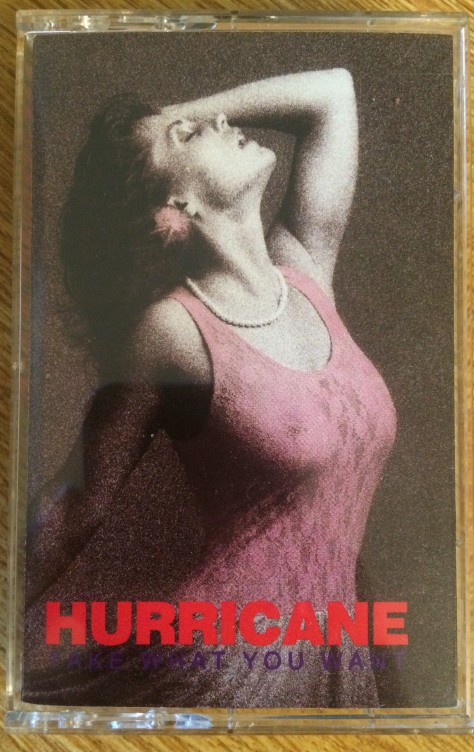