It is safe to say that while I love John Waite’s voice, that by 1995, I had pretty much moved on from any true active interest in his solo work. After listening to Temple Bar, I’m left with a little pang of regret that I skipped out on Waite during this particular period of his career.

The album was recorded the year after Waite left Bad English and according to a quote from Waite on his website, he was given the freedom to record the album as he wanted with no interference from the label.

It seems that plan paid off, at least in part. There are songs that come off as entirely too mellow for me such as the covers of Van Morrison’s “Someone Like You,” “I’m So Lonesome I Could Cry” from Hank Williams, and the Bill Withers song “Ain’t No Sunshine.” Maybe it is just the fact that I’m not particularly enamored with the original tracks but these renditions just came off entirely lacking in any kind of feeling for Waite making the songs his own.

Once you get into the original songs on the album, things get a lot more interesting though. I thought the album opener “How Did I Get By Without You?” was a bit afflicted by that same sense of mellowness, but the song’s overall melody was pleasant enough that I looked passed the slow pacing.

Lyrically, the album has some real high points. The first song to really kick things up a bit in terms of tempo and more in your face instrumentation (guitar and drums in particular) was “Price of My Tears”. The more active presence of the guitar is also fueled by a great set of lyrics. The track “Downtown” is piano driven but the reflective lyrics (which come off not only as someone looking back on their past, but given Waite’s own past, the words are definitely him reflecting back on his own career).

“The Glittering Prize” and “More” are two more examples of how a strong sense of lyric writing help make for that much more of a special tune. “The Glittering Prize” establishes itself as a more driven song while “More” slows things down in order for the words to sink in for the listener.

John Waite has said that Temple Bar is the album where his life as an artist began again. I find it hard to argue with his assertion because while the album isn’t nearly as aggressively uptempo as his earlier solo work, you can immediately sense a more complete package of songwriting from Waite and his co-writers. Despite my own personal lack of interest in the cover songs, the album flows well and it feels less like Waite is trying to satisfy someone else’s demands and instead recorded an album that first and foremost was important to his own sense of the artistic. This is deeply important because if the artist isn’t fully instep with the material, how could you expect the listener to be?

Temple Bar, for me at least, is as good an album as you could hope for. It lies pretty much at the opposite end of the musical spectrum from his amazing No Brakes release but stands well on its own and I’m immensely gratified to have heard it at long last. 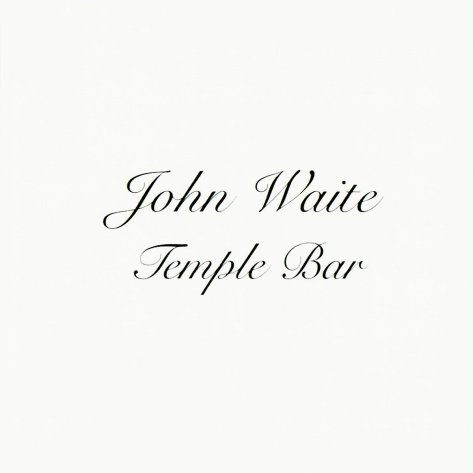