If you are a guitar enthusiast, get ready to have your mind blown! “Guitar Collective 2018” features three talented artists coming together to deliver a night of jaw dropping shredding in The Vault at Greasy Luck in New Bedford, MA. Co-headlining the tour are guitar virtuosos Angel Vivaldi and Nita Strauss (who many of you know from Alice Cooper’s touring band). Joining them on the bill is Jacky Vincent, former guitarist of the band Falling In Reverse. Tickets are only $21.50 and can be purchased HERE.

Vivaldi is supporting his new concept album, Synapse, which was released on October 6 of last year and features guest performances from Strauss, among others. Strauss is gearing up for the release of her first solo album, Controlled Chaos, this fall. Jacky Vincent is promoting his solo release, Life Imitating Art, that was released on August 31st.

Los Angeles born guitarist Nita Strauss has become a force to be reckoned with in the music world, dazzling audiences across the US, UK, Europe, South America, Asia and Africa, and sharing the stage with a diverse range of artists including legendary R&B star Jermaine Jackson, early MTV darlings Femme Fatale, video game supergroup Critical Hit and popular tribute band The Iron Maidens.

Her still, exuberant stage presence and love for all things about her instrument have earned her a stellar reputation and endorsements from many top companies. Nita has been featured in many worldwide print ads and on dozens of albums, trailers, and soundtracks, most recently Heroes Of The Storm (Blizzard) and Grammy-nominated Metal Gear Rising: Revengeance (Konami/ Platinum Games), and is the author of the Premier Guitar column “Drop Dead Shred”. She was ranked first in the Guitar World article “10 Female Guitar Players You Should Know,” and has been featured in Revolver Magazine’s annual “Hottest Chicks in Hard Rock” issue and calendar for the last two years. In 2014 Nita became the official in-house guitarist for the LA KISS, the arena football team owned by Paul Stanley and Gene Simmons of KISS.

In June 2014, Nita replaced Orianthi in Alice Cooper’s touring band and has never looked back. She has become one of the most sought after clinicians in the industry and has done extensive clinic tours across multiple continents. Her consistent touring schedule has shown her to play in front of over a million audience members per year consistently for the past several years.

In 2017 Nita launched her original band, We Start Wars, and classic metal cover band The Starbreakers. Besides touring with Alice Cooper, she is currently putting the finishing touches on her debut solo album that she funded through a Kickstarter campaign earlier this year.

Across his five solo albums, featuring various accomplished players and producers, Angel Vivaldi has produced transcendent songs that communicate dynamic and uncompromisingly intense emotions across the full spectrum. Combining youthful exuberance with deep reverence for the genre’s forbearers, Vivaldi has quickly ascended to breathe the same creative air as the biggest names in rock guitar through his artistically ambitious undertakings.

His latest full-length album, Synapse, is a conceptual opus. It’s a dense exploration of the complex actions and reactions of the mind which either inspire or mirror (depending on one’s belief) the multitude of emotions each individual experiences.

Vivaldi’s commitment to his art is total; during the recording process, he painted and repainted his studio to correspond with the mood of each song. Tracks like “Adrenaline,” “Oxytocin,” “Dopamine,” “Endorphin,” and “Serotonin” musically elicit the exact type of emotions implied by connotation.

Jacky Vincent is an English musician who was the lead guitarist and backing vocalist of the rock band Falling in Reverse from its formation until his departure in 2015 and is the current guitarist of the power metal band Cry Venom. Vincent has released two solo albums, Star X Speed Story (2013) and Life Imitating Art, which was released on August 31st. 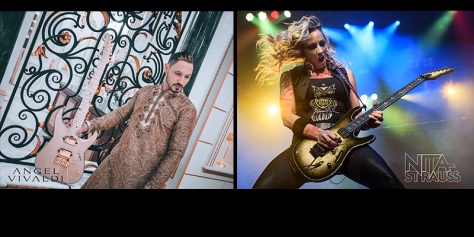