Like many, it was Europe’s 1986 smash hit album The Final Countdown where I first became aware of the band. But funnily enough, it wasn’t the first album from the band that I actually purchased. Instead, I had a dubbed copy of The Final Countdown.

No, the first Europe release that I bought was the Wings of Tomorrow album after the band had already hit it big. I’ve written about two other Europe albums in the past for this series and I’ve had a really good/great opinion about both of those.

However much I liked those two albums, they would’ve paled in comparison to how much I liked Wings of Tomorrow when I first listened to it.

I remember reveling in the opening song “Stormwind”, which was an energetic and invigorating way to start things off. That song and the title track which opened the second side of the album were rockers of the first order. And the presentation of both songs gave each of them a sense of the epic.

I really liked everything about the album including the two ballads. I know that I’ve become more than a bit cranky about ballads as I’ve gotten older, but these two are actually quite enjoyable. On side one, the ballad is “Open Your Heart”, which would end up being re-recorded and released as a single for the band’s Out of This World album (the latter version featured a slightly altered lyric). As for side two’s ballad, “Dreamer”, that started out as a real beauty of a slow moving song before growing into more of a power driven ballad song towards the end of the song.

Surrounding those two slower tracks were a lot more of straightforward rockers, with more of an edge to the band’s sound before it got a little smoothed out for The Final Countdown and Out Of This World.

“Scream Of Anger” had a burning intensity that served as a companion to the album’s closing track, “Dance The Night Away”. I know that the latter song sounds like it would’ve been put out by an 80’s pop act but it is a frantically paced rocker that features a really ripping vocal turn from singer Joey Tempest.

There’s a real thumping stomp to “Treated Bad Again” and I really loved the instrumental “Aphasia”. The band kept up the rock with side two winners “Wasted Time” and “Lyin’ Eyes” as well.

When Bon Jovi had Europe tour with them, I remember reading a review of the concert in the Boston Herald. The overall review was negative but the reporter covering the show slammed Europe saying that they were a second rate Bon Jovi which made them a fourth rate band.

For me, that couldn’t be further from the truth. While I know the band isn’t for everyone, I was really quite taken by the band through the Out of This World album (and later that would include the Prisoners In Paradise album). The band had that 80’s sound that sold so well at the time but even in their early days when the sound was a bit more raw, they really had something going for them and anyone who just writes them off without really giving their early albums a good listen is simply doing themselves a musical disservice.

Wings of Tomorrow is an entirely overlooked album and I wish more people had checked it out at the time. I’d love to see the album get a reissue in order to bring a renewed spotlight to just how musically entertaining the album actually is.

The album was originally credited to Joey Tempest (vocals), John Norum (guitar), John Leven (bass) and Tony Reno (drums). I have the US release of the album and those liner notes list Tempest, Norum, Leven and deletes Reno (who was fired from the band and allegedly had his drum work replaced by a drum machine) while adding drummer Ian Haugland and keyboardist Mic Michaeli. As near as I can tell, neither actually played on the Wings of Tomorrow album though.

Joey Tempest is credited with writing eight of the songs on his own. John Norum wrote the “Aphasia” instrumental. The song “Scream of Anger” started off titled “Black Journey Through My Soul” and bassist Marcel Jacob has a co-writing credit with Tempest for the song.

Jacob, who joined the band for a short time when they were still called Force, went on to play with Yngwie Malmsteen’s Rising Force as well as the band Talisman with singer Jeff Scott Soto. He also played on John Norum’s 1987 solo album Total Control (another album I’ve written about for The Cassette Chronicles). Unfortunately, he died by suicide in 2009. 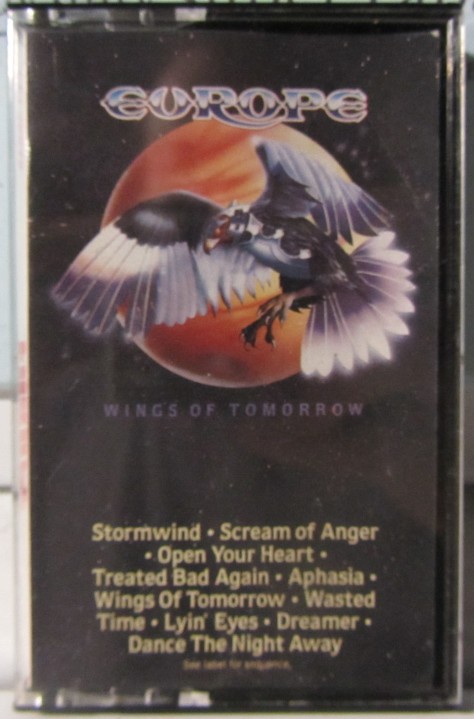