I’d like to say that I can remember exactly where I picked up the cassette edition of Dio’s Dream Evil album, but I simply have no idea. What I do remember was the reasons I bought it when I saw it. I know that I never saw an ad for it in one of the many music magazines I read back in 1987. Instead, I stumbled upon the album while searching through the wall display at whichever record store I was standing in at the time.

There’s a couple of reasons why the album appealed to me. The first is that at the time I was still a relative newbie to rock and metal fandom and my love of comic books made the song title “Sunset Superman” stand out to me. Yes, it’s a bit silly of a reason to be interested in buying something sight unseen but it’s true. The other reason is that as a new metal fan, I loved the album title and creepy seemingly evil cover art. Again, I know it sounds rather a trite reason but there you go.

Of course, you might be wondering why the simple fact of it being a Dio release wasn’t the reason I bought it. Well, sad to say this but until this album, I really didn’t have any exposure to Ronnie James Dio. I know, right? Living in this world and not knowing who Dio is? I feel a bit ashamed to even admit that fact.

But I think I’ve more than made up for that musical blunder on my part, which I’ll get to later.

As for the album, I know that most people likely prefer Dio’s first three solo album Holy Diver, The Last In Line and Sacred Heart but for me, Dream Evil remains an album that I completely adore.

The album is mostly a fast paced rocking affair. The nine songs on the album all stand out in some way or another. The title track is appropriately themed and the opening song “Night People” gets things off in a rousing fashion.

I’d say that there is a lot more keyboard in the overall sound on this album but I think it helps rather than hurts the material. Of course, there are varying degrees of tempo even within the rocking tracks. “Overlove” (which for some reason appears in bold type on the cassette liner notes while the rest of the songs are printed in normal type) is pretty hard driving, particularly with Craig Goldy’s guitars screaming alongside Dio’s vocals.

When Dio and company (Goldy, drummer Vinnie Appice, bassist Jimmy Bain and keyboardist Claude Schnell) do take their foot off the gas, the tracks “All The Fools Sail Away” and “I Could Have Been A Dreamer” are the result. Each song is simply an epic in and of itself.  On the former, I loved the way Dio sang the lyric line “We bring you fantasy” with a clean and clear delivery and then followed that up with “We bring you pain” with a really dark sounding growl added to the vocal. It’s those small little things that made me instantly love the album.

Now, I mentioned how I didn’t know about Dio before buying this album. It’s been a quite a turnaround for me in that regard. I am a huge fan of Dio these days, to the point of being rather protective of his music whenever I heard a cover band playing one of his tracks. I guess you could say I’m kind of bitchy about it actually. I’ve heard versions where the singer doesn’t quite hit the mark and I can feel the misplaced ire rising inside of me. It’s sad, but true.

I’ve bought everything I could get my hands on as well. Whether it is The Elves, Elf, Rainbow, Black Sabbath, Heaven and Hell or his solo material, if it features Dio (and I’ve heard of it) I’ve picked it up. I can’t get enough of his vocals, of which I am an unabashed fan. I had a friend of mine mention that Dio is the best pure singer that rock and metal has ever had and while there are plenty of other singers I both like and love, I find it hard to disagree with that assertion.

I should mention that the cassette I bought back in 1987 is the one that I listened to in advance of writing this article. It still works fine and the music sounds as great as the first time I listened to it. I tried to see if there was something I didn’t like but I came up empty.

Last week marked nine years since the death of Ronnie James Dio, and yet his legacy remains not only intact but it still seems to be growing. While there is much to celebrate from his career, Dream Evil is not only the starting point for my love of Dio, but it is the benchmark to which I always find myself returning to over and over again.

NOTES OF INTEREST: The Dio Disciples band, which is officially endorsed by Dio’s widow features Craig Goldy in that lineup. They played a show in New Bedford, MA, last summer that I attended. I had purchased a CD edition of Dream Evil prior to that show and it now bears Goldy’s signature.

Meanwhile, bassist Jimmy Bain, drummer Vinny Appice and keyboardist Claude Schnell formed Last In Line in 2012 following Dio’s death in 2010 with original Dio guitarist Vivian Campbell and released the album Heavy Crown in 2016, though Schnell was out of the band before the album was recorded. Jimmy Bain died in 2016 after the album was released. Last in Line has played two shows in New Bedford in the last year or so.

Dream Evil is the last album that featured the mascot Murray on the album cover art. 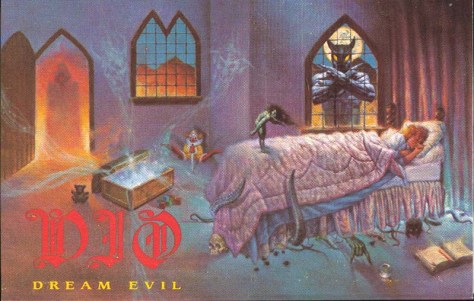 The day we never thought would arrive is finally here! Tune in at 2:15 PM (EST) on YouTube to watched the announcement of the winners of our Limelight Magazine Music Awards! The event is short and sweet. Stormstress is hosting with live performances by four musicians who were randomly drawn from all of the the nominees. https://www.youtube.com/watch?v=IWAzf7k9prU
All new episodes of “The Young and the Restless” resume on August 10th on CBS followed by more new episodes of “The Bold and the Beautiful.” Covid-19 has stopped almost all of the entertainment industry in 2020 but not the soaps! Tune in!
#BlackoutTuesday (Music fans will understand this photo)
The Limelight Magazine Music Awards has a new date of May 31, 2020, with @stormstressband hosting the event!