The Death Row album is the 10th studio album from Accept and it is jam packed with a lot of music. This is both good and bad in my view. When this album came out I wouldn’t have said that I would count myself as anything more than perhaps a casual fan of the band. Despite loving the song “Balls To The Wall”, it took me a while to get around to becoming a full-fledged member of the Accept fan base.

But now that I am a huge fan of the band, I’ve acquired most of their studio albums and get to enjoy what I may have missed out on the first time around. What I found with Death Row and its 15 song track listing is that much like a novelist who turns in a book that is entirely overwritten, the band could’ve used an editor to prune the album of its weakest parts.

The album does get off to a strong start. The title track opens the album with a relentlessly pounding soundtrack and there is an oddly effective kind of rhythmic swing to singer Udo Dirkschneider’s vocal performance on the track.

On the rest of side one, songs like the rocket-fueled “Sodom & Gomorra” and “Guns ‘R’ Us” help give the album some of its highest points. On “Guns ‘R’ Us”, guitarist Wolf Hoffman has a particularly fantastic solo.

But then you have songs like “Dead On!” and “Like A Loaded Gun” which never felt all that fully-formed to my ears.

Still, the side closing “What Else” is a pretty solid track and I love the song “The Beast Inside”. That particular song starts out with a slow intro that helps establish a moodier atmosphere to the track. Even as the pace of the song picks ups, that ominous tone remains throughout and helps give the song that much more of an epic feeling.

Side two of the album found me discovering it is probably not a good idea to listen to an album first thing in the morning when you had a mediocre night of sleep. I actually nodded off in the middle of the music and had to rewind the tape to listen to the two songs I missed.

Side two opens strongly with aggressively attacking numbers like “Stone Evil” and “Prejudice”. The lyrics for the latter song are anti-racism in nature but while the sentiment is strong that message doesn’t detract from the song as a whole. That is the true sign of a great song in my book.

Death Row features just one slow song that might be mistaken as a ballad. For all their metal bonafides and the gravelly rip your throat out vocals from Dirkschneider, I almost always find myself impressed when they pull out a song that is slow and dramatic in presentation. The focused clarity of the vocal performance on “Writing On The Wall” is pretty affecting.

The song “Generation Clash II” felt like a stab at a sci-fi angle to the band’s songwriting but it came off for me a bit pedestrian. I can live with that but I am utterly confused about the decision to close out the album with the instrumentals “Drifting Away” and “Pomp And Circumstance” (yes, the music you hear played at high school graduations). Neither song is particularly intriguing and these are definitely songs I would’ve cut from the release.

The volcanic rocking from Accept is best demonstrated on Side Two with the songs “Bad Habits Die Hard” and “Bad Religion”. Fast paced and relentless, you will not get a second’s rest.

I suppose that when you have 15 songs on an album, there’d bound to be a clunker or two. It is likely the nature of the beast when it comes to songwriting. But in the final analysis, Death Row is a solid album that could’ve been even greater if Accept had been a bit more judicious selecting what songs they included on this release.

Stefan Kaufmann recorded the album’s drum tracks except for the songs “Bad Habits Die Hard” and “Prejudice”. Those were done by Stefan Schwarzmann, who took over as the drummer for the tour supporting the Death Row album when Kaufmann stepped down due to health problems.

Drummer Carmine Appice is mentioned in the thank you section of the liner notes. 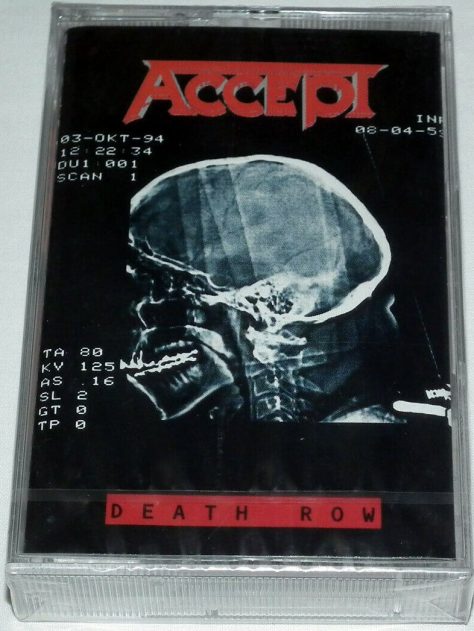