The English Beat will perform at the Narrows Center in Fall River, MA, on Friday, April 1, 2022, at 8 p.m. The band continues to dish out two-tone, ska, reggae and new wave, while mixing social commentary with danceability. Purchase tickets HERE.

Founded in 1979 by Dave Wakeling, The English Beat is a band with an energetic mix of musical styles and a sound like no other. Their infectious sound, which crosses fluidly between ska, soul, reggae, punk and rock, has allowed them to endure for four decades and appeal to fans of all ages all over the world.

Throughout their career, The English Beat has scored multi-platinum record sales, sold out shows and, most importantly, universal fan approval because they kept “The Beat” alive.

Along with their contemporaries The Specials, The Selecter, and Madness, the band became an overnight sensation and one of the most popular and influential bands of the British Two-Tone Ska movement. By Christmas 1979, The Beat were riding high in the UK charts with their first single, a smoking remake of the classic Smokey Robinson tune “Tears of a Clown.” Over the course of the next five years, The Beat toured relentlessly and released three studio albums: I Just Can’t Stop It, Wh’appen, and Special Beat Service.

Following a lengthy hiatus, Wakeling continued to keep the music alive and strong, touring the world as The English Beat.

Today, The English Beat is still lead by Wakeling with an amazing all-star ska backing band that will play all their signature tunes, such as “Mirror in the Bathroom,” “Save It For Later,” “Can’t Get Used to Losing You,” “Hands Off, She’s Mine,” and “I Confess,” as well as some covers, songs from General Public, and their 2016 studio album Here We Go Love, the band’s first new release since 1982’s Special Beat Service.

The Narrows Center is located at 16 Anawan Street. Tickets can be purchased online at narrowscenter.org or by calling the box office at 508-324-1926. For those wanting to purchase tickets in person, box office hours are Wednesday through Saturday, 12 noon to 5 p.m. 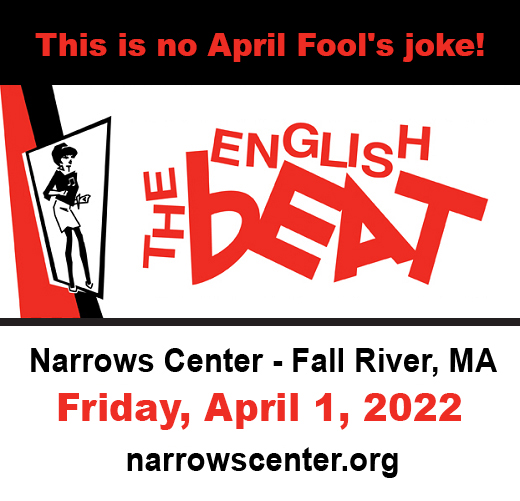