Twelve-year-old Quinn Sullivan knows how to handle a guitar. That’s why blues legend Buddy Guy has appointed him to be the opening act for his current tour.

As a New Bedford native, Sullivan said he thinks their upcoming performance at the Zeiterion Performing Arts Center on Wednesday, August 24, will be special because he’ll be back in his hometown with his loved ones.

“My whole family is going to come out for the show and it will be a big celebration,” he said. “It’s going to be awesome.”

In fact, the two guitarists met at the historic theater five years ago when Sullivan was eight. He went to see Guy perform and they were introduced after the gig.

“It was so cool because I didn’t know I was going to meet him,” said Sullivan. “It was a wonderful experience. I had a guitar with me for him to sign and from there he said, ‘Be ready when I call you.’”

Shortly after, Guy contacted Sullivan and requested that he join him for a few shows. By the third performance, Guy asked him to appear on his Grammy-nominated album, “Skin Deep,” which was released in 2008.

“I played the solo played on, ‘Who’s Gonna’ Fill Those Shoes,’” Sullivan said.

To repay the favor, Guy performed on one of Sullivan’s songs, “Buddy’s Blues,” which is featured on his 12-track debut blues-rock album, “Cyclone.” It was released in early spring of this year and produced by Tom Hambridge in Nashville, Tennessee.

“The album is number seven on the blues tracks right now,” said Sullivan. “I’ve written songs with Hambridge and have been learning a lot from him. Recording was a really cool experience because he’s a great producer. He’s written for so many artists and is really a cool guy. Being in the studio was awesome.”

Another thing that Sullivan thinks is “awesome” is the fact that he finished sixth grade just a few months ago and is now on tour with Guy. This summer, he said he is enjoying the opportunity to travel the United States and visit venues he’s never been before.

In particular, Red Rocks Amphitheatre in Colorado and Hollywood Bowl in California were the biggest highlights of his journey so far. He also liked a few clubs in Chicago.

“The best part is definitely playing at cool places with him,” Sullivan said. “I’ve been all over the country. It has been awesome to travel with a legend.”

During the last four years, Sullivan and Guy have played together more than 30 times. On this tour, he’ll open for Guy at about 20 concerts and will also play a handful of solo shows.

But, Guy isn’t the only well-known blues guitarist Sullivan has rubbed shoulders with. In February of 2009, he performed with B.B. King at the Beacon Theatre in New York City.

“It was incredible,” said Sullivan. “I’m going to be doing another show with B.B. King and Buddy in upstate New York soon.”

Someday, he hopes to expand his already incredible resume. He hopes to play a show with Eric Clapton.

“I’ve loved him since I was five or six,” said Sullivan. “I’ve always looked up to him as a guitar player, an artist, and a person, so that’s why I want to meet him. He’s just a cool musician.”

In addition to Guy, King, and Clapton, Sullivan has been heavily inspired by other blues and rock musicians such as the Allman Brothers Band, Derek Trucks, and Pink Floyd. The Beatles are among his favorites, too.

“They would have to be the band that I would say influenced me the most over the years,” he said. “I’ve listened to them since I was three. I was a Beatle fanatic and that’s all I listened to for five years. My mom and dad always had their music in the house and I loved them right from the start.”

Immersing himself in his parents’ music collection is what sparked his interest in guitar. He said the instrument, “just kind of stuck out over everything else.”

“My parents bought me one when I was three and I started playing around with it,” Sullivan said. “I began taking lessons when I was five. From then on, I kept at it.”

He can also play the drums, some keyboard, and a little bass. But, when he’s not busy being a young celebrity, as he has been featured on The Oprah Winfrey Show; The Ellen DeGeneres Show; and Jimmy Kimmel Live, Sullivan said he likes hanging out with friends and playing tennis and basketball.

Sullivan will continue to tour with Guy for the remainder of the summer, through the spring. In that time, he plans to finish up his second album.

“We already have some tracks written,” he said. “We’ll probably start that in December or January.” 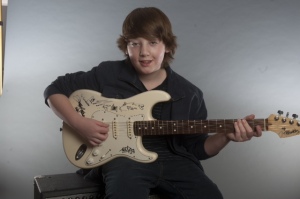