The sixth studio album from .38 Special continued the band’s commercial peak from the previous release Special Forces (which I wrote about in a previous article in this series).

Tour De Force was highlighted by two big hits in the songs “If I’d Been The One” and “Back Where You Belong”. While strictly speaking the former was the more successful song in terms of chart ranking, it is “Back Where You Belong” that is the most memorable song of the duo for me. However, both songs are quite the earworms when you listen to them. Each is a faster paced track full of melodic hooks and great vocal performances. This isn’t much of a surprise to anyone that has ever been a fan of the band I know, but still at the point in time this was released, it is always good to have musical beliefs reconfirmed over and over again.

Surprisingly though, one of the best songs on the album is the first song on Side Two of the album. “Twentieth Century Fox” has a nice edgy yet still commercially viable musical vibe and the song has a great sly lyrical slant as well as a powerfully assured vocal delivery. I’d never heard the song myself until I bought a greatest hits collection from the band but this song has quickly become one of my favorites.

Sadly, I cannot say the same for the Side One song “One Time For The Old Times”. Despite a slighty uptempo pace to the song, the vocal performance left me wanting something more. It struck me that there was an attempt at being a lot more subtle in the delivery of the lyrics but instead of coming off as a distinct change in the performance, it crashed and burned as a song that was far too mellow and relatively unworthy to have been a .38 Special song.

The song “Undercover Lover” features a set of lyrics about a male gigolo and it made me think of that David Lee Roth “Just A Gigolo” track. The styles of the two songs are different of course, but the blunt for the times lyrics kind of made me chuckle. It’s a decent song though and I really liked the guitar work throughout the track. Taking a different lyrical bent on “One Of The Lonely Ones”, the band sings about a broken hearted woman unsure if she’ll seek out romantic companionship again.

“I Oughta Let Go” was pretty much a 180 degree turn from the band’s brand of southern rock/melodic pop rock. There was a real swinging country pop sound to the song. Everything felt different with the performance. It was kind of out of place on this album given the rest of the material but I can’t lie, I dug the song.

Perhaps the single most surprising song on Tour De Force for me was “Long Distance Affair”. Everything about this song screams “High energy quality rock and roll”! Musically, it is a fast paced guitar oriented number. And when you combine that with the vocals, you get a song that I think should’ve been one of the band’s bigger hits. Also, when looking at the liner notes, it is one of the longer set of lyrics on the album. So there’s a bit extra in the song’s storytelling as well.

Speaking of the liner notes, it probably doesn’t matter to anyone now but I noticed as I read along with the lyrics that what ended up on the album didn’t always match what was written down in print. Also, for some reason the sequencing of the song lyrics in the liner notes is all over the place in comparison to the running order of the songs. For me, that seems a little slipshod. No it doesn’t actually affect the enjoyment of the album at all, it was just something that probably annoys only me.

What I found when listening to Tour De Force is that for me, there are times when I hear .38 Special as more of a straight forward rock/pop band than one that is more universally recognized as a purveyor of the southern rock style. I know that some might consider this a bit of an insult to the band, but I assure you it is far from that.

Because I grew up listening to the band via their hit singles on American Top 40, they were pop hitmakers to me back then. Of course, now that I’m far more understanding in terms of musical competency than I was back then, I grasp the full scope of the band. But in 1983, much like Survivor, .38 Special was a pop rock band to me and Tour De Force is a prime example of why I loved them for it. 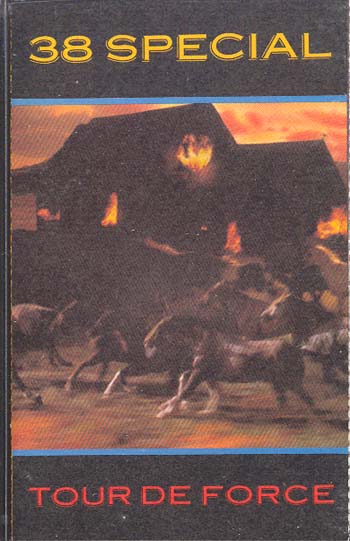