It is a funny thing about the band Poison. Despite the fact that they were one of the most successful bands back in metal’s 1980’s glory days, I don’t think they’ve ever gotten much in the way of any critical acclaim.

I distinctly remember watching some documentary type film on the band (it might’ve been a Behind The Music episode, but I can’t be sure) where one of the talking heads interviewed pretty much crapped all over the quality of the band’s material. He basically dismissed them as almost a joke.

Well, more than three decades later, I think the joke is on all of those people who wrote the band off because their music has survived the passage of time and the band is still a going concern today even if in a more limited capacity.

I didn’t completely write the band off back then, but I wasn’t what you would call their biggest fan either. I owned the Open Up and Say…Ahh! album when it came out but while I enjoyed the various singles the band released, it wasn’t until their ill-fated collaboration with guitarist Richie Kotzen on the Native Tongue in 1993 that I truly raved about one of the band’s releases.

But as time has gone on, I’ve really come to enjoy the band’s early catalog a lot more than I did on the first time around. Today’s case in point is the Flesh & Blood album.

I have a bit of a confession here. I’d been listening to this album on CD for a couple of weeks prior to me receiving a cassette copy of the album from a not-so-mysterious benefactor. So I had some renewed passing familiarity with the music before putting the cassette in my player.

But it wasn’t until I listened with the intent to write this article that I really got into the album. Okay, the opening intro piece (I really hesitate to call it an instrumental) “Strange Days Of Uncle Jack” wastes a perfectly cool sounding title on a what I consider to be a thorough waste of time and I wasn’t all that interested in the actual instrumental “Swampjuice (Soul-O)”.

But after that? Poison really killed it with their songs on the album! The fun side of the band is still on great display but they were a lot more serious in their subject matter at the same time.

On side one, “The Valley of Lost Souls” kicks the album off in truth with a blazing highly energetic romp that got my foot stomping and badly singing along. I did strongly remember the album’s nominal title track “(Flesh & Blood) Sacrifice” from when the album was originally released. It was one of five songs released as a single from the album, four of which hit the Billboard singles chart Top 40.

The first of the two singles that made it all the way into the Top 10 was their big rocker “Unskinny Bop”. Yes, the title really doesn’t mean anything since it was kind of a placeholder but out of accident comes “genius” because tell me you don’t remember the hell out of this song!

As for the rest of the album’s first side, you’ve got killer rock numbers like “Let It Play” and “Come Hell Or High Water” as well as the mid-to-uptempo song “Life Goes On” which mixes power balladry with an amped up rock style at the same time. It’s a great sounding song in my opinion.

The second side of Flesh & Blood kicks off with a song that still gets me to this day. “Ride The Wind” is pretty much a description of living life on a motorcycle cruising the highways and byways with the freedom of the open road your only concern. Despite the fact that I’m a cranky old homebody these days, it still makes me nostalgic for when I was young and wanted nothing more than to leave it all behind and live that kind of life. I sure as heck wouldn’t want that now, but the memories this song stirs up are still up there in my noggin and it always brings a smile to my face.

I loved the slow bluesy intro on “Ball and Chain” and the fast pacing of “Don’t Give Up An Inch”. Poison also hit the top 10 singles chart with their monstrously successful power ballad “Something To Believe In”. That song still gets played on radio stations (and not just classic rock stations) to this day. I’m not sure if I liked the song the first time around or if I might’ve made fun of it but I know that nowadays, I really love the song so there is definitely no making fun of it now for me.

I know for sure that I didn’t give this album, and almost certainly the band themselves enough credit back in the day but as I look back on the Flesh & Blood album now, it’s a heck of an entertaining rock and roll record almost from start to finish. How much of an impression did the album make on me? As I’ve been writing this article, I’ve been listening to the album yet again. It just rocks, plain and simple.

NOTES OF INTEREST: The Flesh & Blood album was certified triple platinum. The 20th anniversary reissue had two bonus tracks on it including an instrumental cover of the Sex Pistols’ track “God Save The Queen”.

Sadly, the one time I saw Poison in concert, they were headlining over Tesla and they were awful. It was one of the lesser shows I’ve seen and Tesla blew them off the stage.

Poison was supposed to be doing “The Stadium Tour” with Motley Crue, Def Leppard and Joan Jett and the Blackhearts during the summer of 2020 but that tour got bumped to 2021 due to the pandemic closure of pretty much everything. 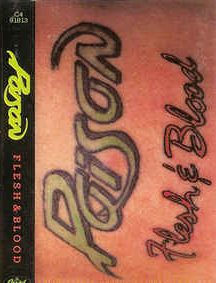